Last week I wrote about my process for Game Chef 2017. The competition ended last night and I’m excited to share my submission: Across the Border.

The game takes place while the players are hiking. The characters are about to covertly cross a border with the help of a local guide. The guide has instructions for interpreting the surroundings: sirens might be the border patrol; a water tower might be a watchtower.

I was able to run a playtest a few days ago and I’m very happy with how it turned out! I’m also pleased with the visual design of the rules. I used the Lucid App to do style transfer on some hiking photos and ended up with the aesthetic you see above.

In my previous post I talked about taking a Stage Gate approach to the competition. Now that it’s over, I’m glad I did!

I ended up with:

This process definitely took longer than focusing on just one game but I think I arrived at a better final candidate and I developed a bunch of fun ideas that I’ll likely remix into future games.

Here’s a quick overview of the other games I noodled on:

A game about unification

This game had players creating a map of nations out of yarn and then cutting the yarn to unify territory. There were some interesting mechanics in it but it was lacking a pop to it. I’ll likely reuse some of the ideas in a future game.

Adventures on a map

This game was about creating Indiana Jones style travel lines on a map. It quickly bifurcated into a game about recovering archeological relics and a game about stirring up resistance under a totalitarian regime. I liked the core ideas but it wasn’t a perfect fit for the competition.

Inspired by my noodling on the previous idea, I wrote up a ruleset for playing a merchant trading company. The players explore the seas and open trade routes while managing their wealth, crew, and reputation. The game is played across a room and the routes are represented by yarn. I ran a playtest of this and it was fun but needs a bunch of work to make it a complete game. Here’s a photo from the playtest: 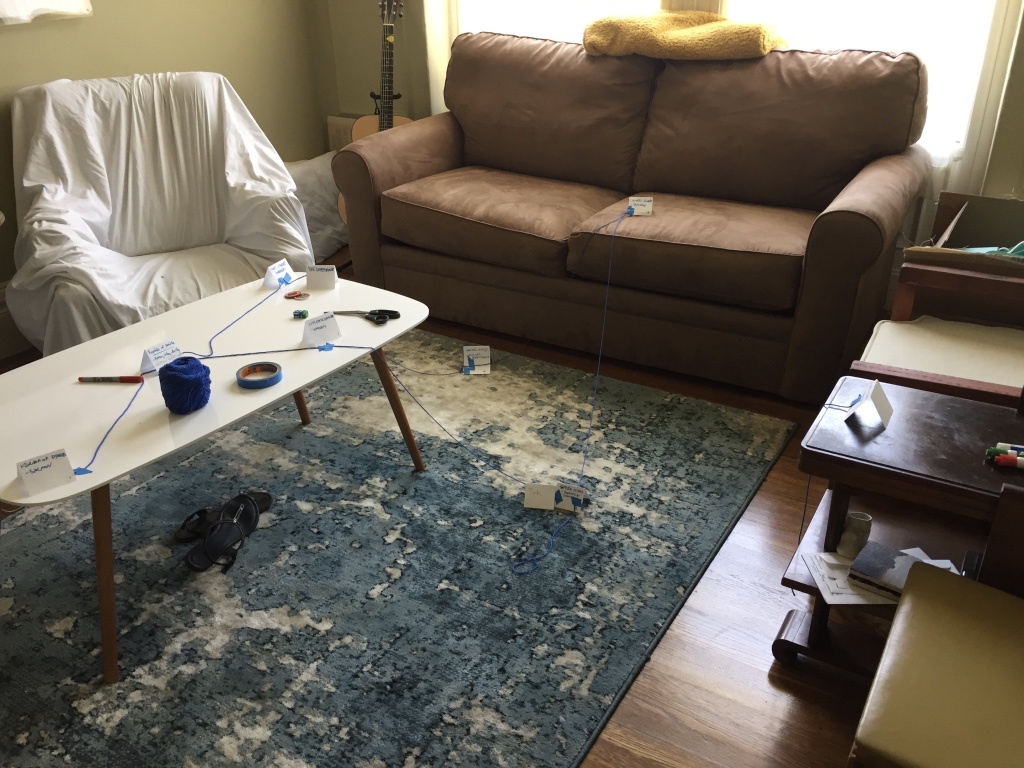 I created the initial rules for this. I still think it would be fun to playtest but it looked like the setup would take too long.

This game had players take on the different aspects of a shared character’s personality. I did a little bit of psych research for this one and sketched out the rules but I wasn’t excited enough to continue working on it.

I loved taking this approach to the competition and would definitely consider doing so again. I high recommend it to folks who have the time!

As always, I’ll post updates here. Until then, you can email me at [email protected]