This weekend a few friends and I ran an experiment in interactive storytelling. We used Twitch to livestream an RPG session and we collaborated with the audience to share the story. It went smoothly and we learned a bunch about interacting with an audience. Big thanks to my collaborator / co-GM Nathan Maton and our players Nick, Harry, and Andrew! 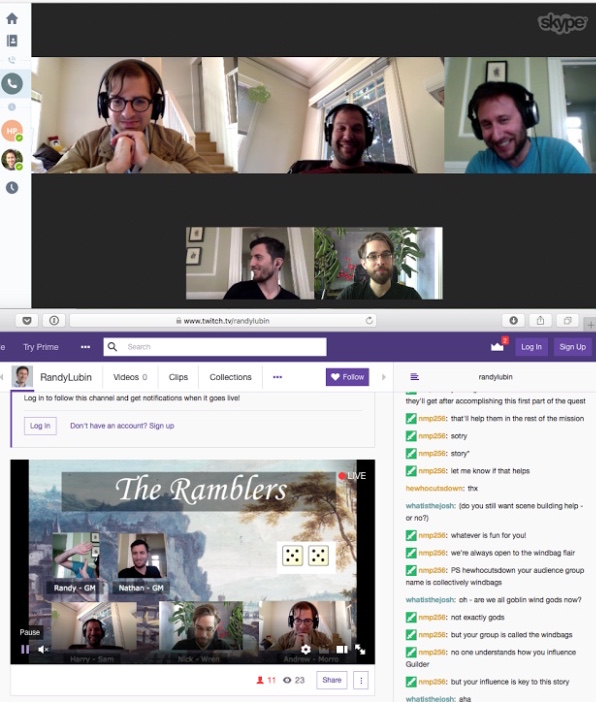 The tech stack we used isn’t easy but it didn’t take too long to learn and prepare.

We used Twitch to host the stream. It was pretty easy to work with and the video quality was solid. There was a ~10 second delay on the video which slowed down some of the audience feedback but we were able to mitigate that by asking for suggestions in advance of when we needed them. Due to a confusing UX, we didn’t end up archiving a copy of the video; make sure the archive settings actually save!

We used OBS to capture the video from my desktop and stream to Twitch. OBS isn’t intuitive but there a bunch of good tutorials online. We used Skype to video chat among the players and I used OBS to grab part of the Skype window for each participant. We used Soundflower to capture the Skype audio and include it in the stream.

We used OBS to capture Google Slides, which I used for the background, including the name tags for each player. That made it easy to change the background for each scene in the story. The final piece of the stream was a small part of a browser window with a random dice roller so the audience could see the dice rolls. OBS packaged Skype A/V, Google Slides, and Dice and sent it all to Twitch - it worked well! 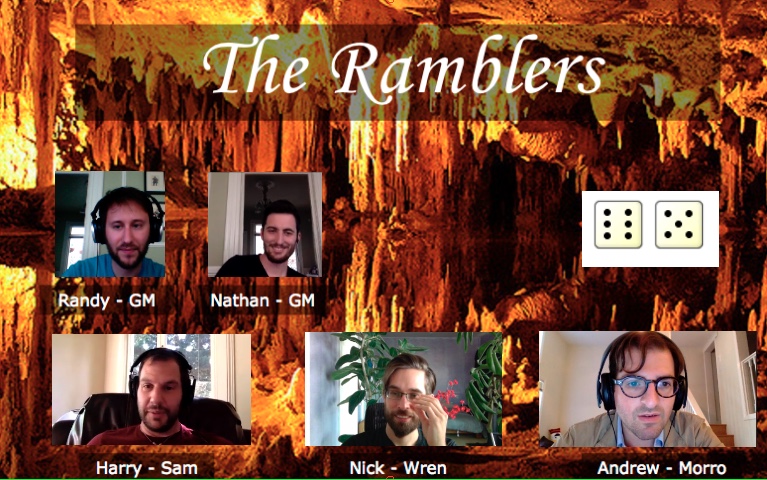 We went with a fairly simple story in a fantasy world where the player were heroes commissioned by a port town to protect them from threats. The town owned a powerful artifact that was stolen at the beginning of the session and the players had to confront a powerful necromancer to get it back. We decided to keep the story simple because we wanted it to be easily digested the audience, especially if they missed part of the stream.

My focus for the session was acting as GM and interacting with the players. Nathan was co-GM and responsible for managing the audience and conveying their suggestions to me; Nathan and I collaborated on the prep work for the experiment, including the story and audience interaction structure.

As the story progressed, Nathan would solicit suggestions from the audience that included:

Our audience peaked at 12 viewers with about 5 pitching us suggestions. We were pretty happy with this given we did almost no advanced promotion. The audience threw us some crazy ideas and it was interesting to incorporate them on the fly. They decided that the antagonist was related to one of the players so I made them the long lost twins of Harry’s character.

The biggest takeaway is that this format is exhausting! Both Nathan and I were worn out by the end of our two hour session. The mix of storytelling, improv, and community management carries high cognitive load. I don’t think we could have pulled it off with just one of us.

A quick shoutout to Dustin and Josh who watched and shared their feedback - thanks!

This was a very fun session and I’m excited to try another livestream experiment in the future, though probably with a different framework. I continue to be excited about the potential of interactive entertainment and audience participation and want to play with something that gives audience members even more agency in shaping the story, potentially with the ability to jump in the stream in audio or video form as a guest star.

As always, I’ll post updates here. Until then, you can email me at [email protected]