Last week I released my first “plot guide” – Save the Galaxy, a supplement for Galactic 2e. This post will explore the design space of plot guides and why I’d love to see more of them.

A Love of Plot

When it comes to storytelling games, I love to weave fast paced plots that reach satisfying conclusions. This is especially true for single-session games where it can be fun to race through key story beats and wrap things up neatly by the end of play.

I’ve found that many games out there have phenomenal support for character creation and arcs, worldbuilding, and individual story beats yet have little to say when it comes to overarching plot.

When there’s a lack of plot support, there’s a risk that the story will meander and players won’t be sure exactly how to push the story forward. Sessions might end with the story just petering out. This is especially true for novice players who might also be focused on learning the rules.

First caveat – there’s no wrong way to play! I’ve played in wonderful sessions that were just focused on worldbuilding or character creation or exploring how characters interact with each other. That said, my personal preference is often for a strong narrative arc with a clear resolution and I often find this type of play unsupported.

Second caveat – I’m most focused on indie tabletop games and especially GMless games. Traditional games (like D&D) have plenty of pre-written adventures or rely on a GM to push the story forward.

I’d love to see a new category of game supplements: Plot Guides. These would walk players through a single session of the base game that hits specific narrative beats and tells a complete story.

Ideally these Guides would include:

My Example: Save the Galaxy

I’ve just released my first Plot Guide: Save The Galaxy. It’s a supplement for Riley Rethal’s game Galactic 2e. Save the Galaxy guides the players through telling a tightly plotted one shot where a group of heroes foil a dastardly plot by The Mandate (an analog to The Empire in Star Wars).

Galactic 2e is a Belonging Outside Belonging (BoB) game that is heavily inspired by Star Wars. Like other BoB games, there’s no facilitator or dice rolling. Players share responsibility for representing the different elements of the setting in play, as well as the actions of the non-player characters.

Galactic does a great job of supporting character creation and character arcs, through evocative character sheets and moves (actions). However, there isn’t direct support for telling tightly plotted single-session stories – and that’s not the game’s intention.

With Save the Galaxy, my aim is to help any group of players take the strong character sheets and setting pillars from the Galactic Playkit and quickly tell a story with a complete narrative arc. It’s free and only three pages, so I recommend you give it a quick look!

Here’s a breakdown of what’s in it: 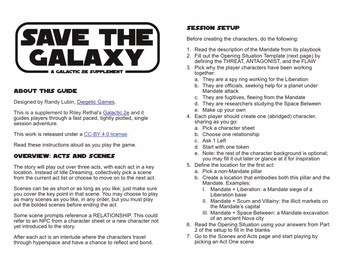 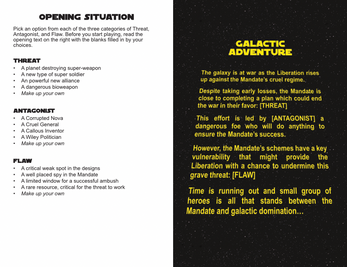 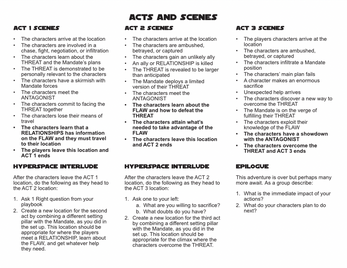 And that’s all! My hope is that it’s easy to use at the table and provides plenty of structure without being too constricting. If you end up trying it out, I’d love to hear how it goes.

The Future of Plot Guides

I’d love to see a wave of Plot Guides made for a diverse array of games. I could see them working well for a number of systems beyond Belonging Outside Belonging and they could work well in games with facilitators, too.

I’ve licensed Save the Galaxy under a Creative Commons CC-BY 4.0 license which means you can share and remix as much as you’d like. I think there’s room for plenty of other Star Wars inspired story arcs beyond the one I created and I’d love to see what you come up with.

If you hack Save the Galaxy or make your own Plot Guides from scratch, let me know; I’d love to hear about it!

Some games are already oriented toward tightly plotted single sessions. For example, both Fiasco and The Zone do a great job of hitting the right plot beats and reaching an ending.

For a while, I was seeing plenty of adventure starters for Dungeon World, which would give a GM lots of fodder to start a session but not too much support toward finishing one. Dragonslaying on a Timetable is probably the closest I’ve seen to a plot guide and it definitely influenced my design of Save the Galaxy.

Larp, in general, is great for tightly plotted one shots. My own game Behind the Magic even has three acts with scene lists for each. There’s so much tabletop games can learn from larp and I’m excited to see more inspirations from larp show up in tabletop.